The awards committee and section committee would like to congratulate Michael Deland on the award of the prize for his essay "Basketball in the Key of Law: The Significance of Disputing in Pick-Up Basketball." 2013 Law & Society Review. 47(3): 653-85 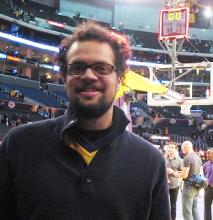 The Melvin Pollner Prize in Ethnomethodology honors the intellectual spirit and memory of Melvin Pollner.  The $1000 award recognizes an article, chapter, or book published between 2010-2014, that develops original work drawing upon, or resonant with, Melvin Pollner's ethnomethodological interests in topics such as mundane reason, reality disjunctures, radical reflexivity, and the connections and contributions of ethnomethodology to other types of sociology. The Award Committee citation reads:

After carefully reading and sharing our views of the four nominated articles, the committee unanimously agreed that this year the Pollner Prize should go to Michael DeLand for his essay "Basketball in the Key of Law: The Significance of Disputing in Pick-Up Basketball." 2013 Law & Society Review. 47(3): 653-85. In this essay DeLand masterfully shows how disputing rule violations in pick up basketball serves to frame the game as a serious competition in which players hold a genuine stake. As he notes, disputes over rule violations in the context pick up basketball present a number of fascinating analytic opportunities for those interested in the rule of law as a mundane practical achievement-a topic Mel Pollner made famous through his ethnographic investigations in traffic courts. Drawing on Pollner's  concept of "reality disjunctures," DeLand highlights how competing versions of what happened in the game (and whether what happened constitutes a rule violation) are adjudicated in the absence of unequivocal legal authorities. The essay makes a compelling contribution to the Pollnerian legacy.
Posted by EMCA ASA at 8:31 AM